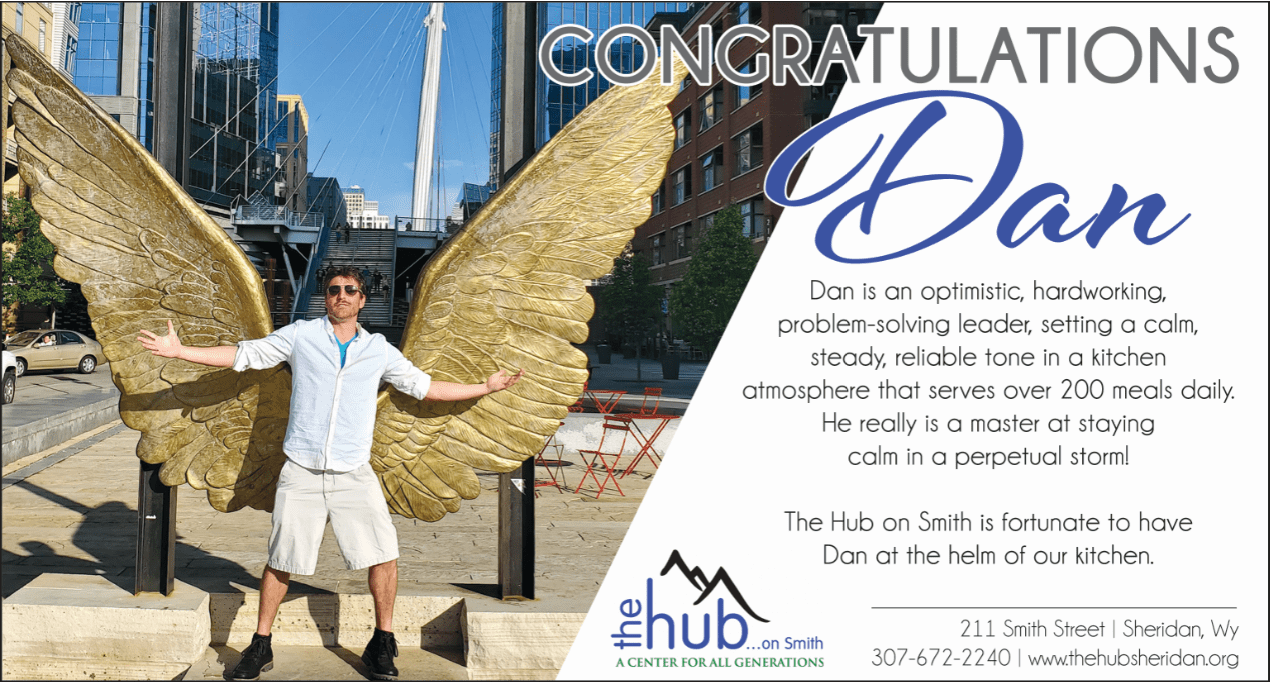 During the day, the 36-year-old Sheridan native is the executive chef PLUS at The Hub on Smith, a nonprofit that supports older adults in Sheridan County. In his spare time, he directs and performs in plays and musicals at the WYO Performing Arts and Education Center and the Civic Theatre Guild. Cole fell in love with acting at Sheridan High School, and the passion reached new heights after he joined the theater and speech and debate departments at Sheridan College.

“Dan was always willing to go the extra mile to get something done,” said Gene Sager, who directed Cole in several productions. “He was a good listener. If you handed him a script, he would read it and bring back comments the next day. From a directorial standpoint, it was really wonderful to work with him.”

“He has a lot of natural talent,” agreed Lillian Graff-Sager, the head of the speech and debate department. “He has a great sense of humor — he could be a bit of a challenge sometimes, but that’s what I used to love because he would always question stuff and try new things.”

At speech and debate nationals in 2004, Cole won in Duo and Prose and placed third in Poetry and fifth in Impromptu Sales. The next year, he headed to Laramie to study theater at the University of Wyoming.

Cole decided to take a break from acting. In 2012, he found a job as a cook at NX Bar Ranch, located near Decker, Montana.

“At the time, I thought I would just go for a summer and then go back (to Laramie), but I ended up staying for six years,” Cole laughed. “It was a pretty interesting adventure.”

In addition to cooking, Cole was caretaker of the lodge, so he lived at the ranch full-time. Soon, he worked his way up to executive chef. His experience at the NX Bar broadened his view and gave him a new skill, but he missed theater.

In spring 2016, he auditioned for “The Producers,” a co-production of the WYO and CTG, and was cast in the leading role of Leo Bloom. For months, he worked all day, drove 45 minutes to Sheridan, rehearsed and then drove 45 minutes back to the NX Bar.

“I love theater,” Cole said. “It kind of reawakened to me to how much I loved it and wanted to keep doing it, even with how hard it was with everything I had going on.”

The next year, in spring 2017, Cole was cast in the WYO and CTG co-production “Musical of Musicals: The Musical.” There, he met Erin Butler, the director of the musical and executive director of the WYO. The two fell for each other.

He took a position as a postal carrier, a novel experience that he enjoyed for a brief stint. Then, in July 2018, The Hub Executive Director Carmen Rideout offered Cole his position as executive chef PLUS, which includes managing maintenance and facilities, in addition to overseeing the kitchens.

Since taking the position, Cole has focused on more fresh, whole ingredients in the meals served in the dining room and grab-and-go cafe and delivered to seniors’ homes.

“I think food is an art,” he said. “I also realize that this is some of the only food that some of my clients actually eat. It’s an important service. It’s gratifying.”

Cole continues to dedicate time to his other art, theater, as he performs and, more recently, directs.

In November 2018, he directed “Escanaba in da Moonlight” for CTG. Currently, he is directing “The Underpants,” which was originally scheduled to run in April but has been postponed due to the COVID-19 pandemic.

His SC mentors are proud of Cole’s progress over the years.

“I love his choices in plays,” Graff-Sager said. “He knows what’s funny, and he casts very well as a director. He’s to the point where he’s been through all kinds of experiences, and that makes him a better actor and a better director.”

Graff-Sager and Sager, as well as friends, family and fans, plan to continue to follow Cole’s theater career on the Sheridan stage and — they hope — beyond.